So, first rule of thumb: before you go switching out Paula and other chips, please make sure you have a +12V and a -12V on your power supply. If not, then there’s where you need to start. Most common errors are not the chips that are defective. 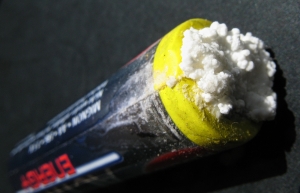 There are 3 types of batteries:

These need to be removed from your Amiga. They will leak and eat your motherboard. Especially the barrel batteries. Best thing to do is to cut the one leg and wiggle the battery until it comes right of the board. You can replace them if you want, but it’s not really neccessary. The only thing they do is hold the date and time. So it’s up to you if you like to replace the battery.

A simple-to-use symptomatic guide for diagnosing faulty IC components on Amiga computers
(includes all version of the A500/1500/2000/2500)
Credits are at the bottom of this page.

The above chips are located on the keyboard. If you cannot reset computer [control-lamiga-ramiga], the most probable cause is Q2. The next most likely cause, 74LS27

NOTE: Computer will function with no -12 volts but serial port will not work.

A known good printer should be substituted to eliminate it as the source of the problem.

Clean heads and check for excess dust in drive. Clean out dust and try again. This may eliminate the problem. In the followings tests, a known good drive should be substituted to eliminate the drive as the source of the problem.

Problems with left, right or both channels:

NOTE 1: Remove all external add ons: extra memory, hard drive, external disk drive printer, modem. This eliminates them as a source of the problem. If computer works normally when all add ons have been removed, start adding devices on, one at a time, until the problem comes back. Then determine which is at fault, the device or the computer.

NOTE 2: Substitute a known good disk drive and power supply so as to to eliminate them as the source of the problem

When you boot up your Amiga you are always greeted with a series of flashing screen colors. On most days the screen will change from dark gray to a couple lighter shades then white before marching on. On bad days, it flicks over to an actual color of the rainbow, each with its own heart-stopping meaning.

What do those colors mean? And what is the Amiga doing during the boot-up process in the first place?

The following is a collection of ancient and excellent information compiled from various sources.

During boot-up, the Amiga is going through a series of system checks and routines.

During this system test the Amiga is sending vital information to the screen with colors. If the system checks out ok, you will see the following sequence that you have seen so many times.

DARK GRAY:  The initial hardware tested OK. the 68000 is running and the registers are readable.
LIGHT GRAY: The software is coming in and seems OK.
WHITE: The initialization test have passed and the system is ready to boot.

These problems could be caused by a number of things such as a loose chip or board.
The red screen may be caused by a loose Kickstart chip that can be fixed by pressing down on the ROM to check it is fitted correctly. Another cause could be a connection problems between the chip and socket that can be solved by straightening an bent pins.

Alternatively, the green screen could be caused by a loose memory board, SIMM, or a loose RAM chip on the memory board. If reattaching these chips do not solve the problem, try them on another Amiga.

Another listing of screen color interpretations:

The keyboard also has its own processor, RAM, and ROM. It also has a selftest that performed on power up in the following sequence.

If the keyboard does not pass the test, it will tell you through the blinking of the caps lock light.

If the Amiga caps lock key LED blinks repeatedly at boot up, another series of error messages must be consulted:

If something is wrong with your system, you may see the following:

It’s not always obvious why your Amiga guru’s. With the codes below, you can break the meaning down to its basic components and get to the bottom of things.

Probably all Amiga owners have seen the guru at one time or another. The guru meditation is what your Amiga does when the low level error trapping routines catch an error before the computer crashes. When the higher-level routines detect the error you are given a requestor saying: ‘Software Failure. Task held. Finish ALL disk activity’, with two gadgets saying retry and cancel. Retry usually does nothing and cancel causes a guru.

The proper term for the guru is an alert. The alerts give you some useful information about why the Amiga crashed and what program caused the program to crash.

S: This (together with D) indicates the subsystem that generated the alert. The various subsystems are (DS):

Ge: This indicates the general error. Basically telling you what went wrong. The various defined General Errors are (Ge):

Code: This gives more detail as to what went wrong. The value that appears here depends on the subsystem and general error.

TAddress: This is the Address of the task that caused the guru (where applicable).

Quite often the processor with trap an error. The operating system will then display a guru. These errors will only contain two digits (the right-most two digits in ‘Code’) and their meanings are:

If you enter a command and comes back with an error message, typing WHY will display more
information about it. Use the FAULT command to display the error message that applies to a error
code.

(just preserving your great information guys, thanks for this! it helps our retro computer community a lot)